During a building completion ceremony held in Gunsan, Jeonbuk on Friday, Taekyung Group chairman Kim Hae-ryun said the production of TiO2 marks the beginning of the group’s efforts to become a leader in inorganic chemicals as well as to ensure a stable supply of the materials in Korea.

SBC’s supply of inorganic TiO2 will be a big relief to local cosmetics makers that wholly rely on Japan which slapped export restrictions on key chemicals this year.

SBC will start produce nanosized TiO2 at its newly built second plant on a site of nearly 10,000 square meters. The new factory has seven buildings including two production buildings, and the company will produce 120 tons of nano zinc oxide (ZnO) and 240 tons of TiO2 per year at the plant.

Kim said the company plans to ramp up output of inorganic UV filters to up to 720 tons including 600 tons of TiO2 next year and boost exports to China and other overseas markets. SBC’s TiO2 will be supplied to multiple Korean cosmetics companies under the brand name of TELIKA. 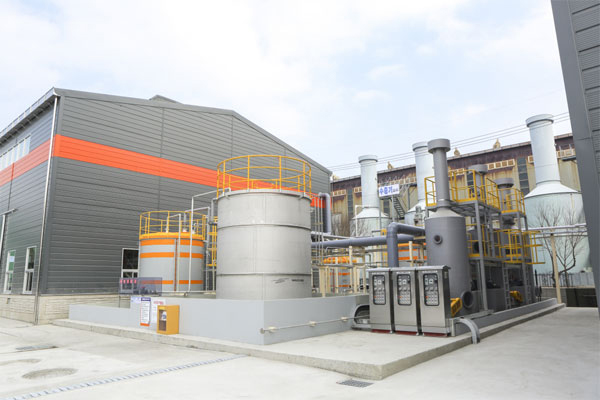 Organic UV filters protect the skin from the sun`s harmful ray by absorbing ultraviolet light, whereas inorganic filters reflect and scatter UV light. TiO2 and ZnO are the only two inorganic chemicals approved by the U.S. Food and Drug Administration for UV protection. Inorganic sunscreens have very low irritation and sensitization potential, but they were not so popular because of whitening on the skin. But SBC’s nanosized TiO2 seldom causes whitening, according to Cho Yong-jae, head of SBC’s research institute.

TiO2 is made by adding basic reaction to raw material ilmenite and then after going through neutralizing, washing, binding with acidic substance, inorganic and organic coating, drying, pulverizing and packing processes. The most important process is the acid reaction, which converts the substance to nanoscale particles.

SBC is a manufacturer of zinc oxide and zinc powder. Its main product is zinc oxide for rubber, which is used to make tires. Its customers include some of the world`s top 10 tire manufacturers.