Britpave, the British Cementitious Paving Association, is advocating the use of titanium dioxide to make concrete roads counteract traffic fumes. 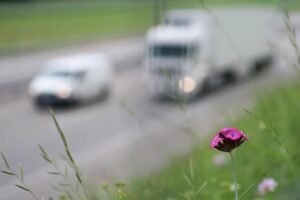 Titanium dioxide (TiO2) has a range of everyday applications from food colouring to UV-resistant skin creams.

We reported recently that Bouygues had signed a partnership with paint company Airlite, which uses TiO2 as an ingredient to turn pollution in the atmosphere back into harmless atmospheric gasses and salts.

Britpave says the same ingredient could be used on the roads and be the answer to Highways England’s quest for new solutions to traffic pollution, which on motorways has increased by almost a quarter over the last 20 years.

Titanium dioxide is a photocatalytic material that reacts in sunlight to absorb nitrate oxides and convert them into harmless nitrates. It is increasingly available as a pavement spray or as an additive to concrete, although it adds 5-10% to the cost of a concrete road.

Joe Quirke points to research carried out by the Eindhoven University of Technology in the Netherlands that found NO2 reduction of 35-40% in areas paved in concrete featuring TiO2. Researchers at the Public University of Navarre, Spain, are developing a nanoparticle coating for concrete uses photocatalytic reaction to reduce up to 90% of nitrogen oxides, 80% of hydrocarbons and 75% of carbon monoxides. In Segrete, Italy, a road treated by Essroc Italcementi with a TiO2 pavement spray resulted in a NO2 reduction of 60%.

“Pollutant eating concrete roads may sound like science fiction but they are a very real solution that should be considered,” said Mr Quirke. “Plus they are the not the only environmental benefit of concrete roads.  In addition, concrete roads can also be self-heating to reduce ice and snow-build-up, self-healing to reduce the need for repair and maintenance and energy conductive for easy wireless charging of electric vehicles as they travel over them. Plus, their thinner pavements, longer performance life and reduced maintenance means a reduced life cycle carbon footprint.”

Panzhihua Haifengxin has developed a range of tio2 pigment which is client-oriented and aiming to address customer needs in the fields of coating, ink, plastic, paper, and so on…